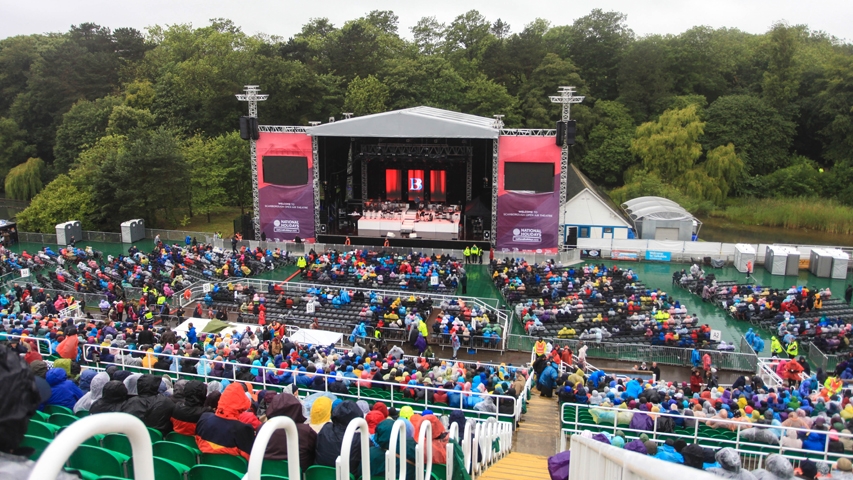 Working with promoter Cuffe & Taylor, the council wanted to more than double the number of shows held in the town centre venue and turned to Symphotech to help them meet new licensing conditions relating to noise levels.

Previously the Open Air Theatre had only held 12 shows a year and Scarborough Borough Council, which owns the site, wanted to expand that to 30 shows a year as part of a long-term plan to raise the town’s profile as a premiere UK resort.

One of the conditions set by the licensing authority was the requirement to carry out more noise monitoring to help minimise disruption to local residents. Symphotech worked closely with the council’s licensing team, particularly the environmental health officers, and put in place extensive measures to monitor noise levels at the concerts, which featured performances by The Kaiser Chiefs, The Jacksons and Michael Ball and Alfie Boe.

To improve the service offered, Symphotech trialled a new system in partnership with NTi Audio UK, which allowed noise levels to be monitored in real time by anyone with access to the system, including the event organisers, promoters and the sound team. In addition to remote monitoring, the team set up a fixed noise meter at a sensitive location  to continuously record sound levels - both ambient background and noise from the concerts - which was fed back via a data server to any internet-enabled device, so levels could be monitored at all times.

“We were able to set levels for trigger points so if certain levels were breached, messages were sent automatically to alert our team, the sound engineers and event organisers. Throughout the events, we used three NTi XL2 sound meters to monitor the levels at the front of house, sensitive off-site locations and at the fixed location.

“We monitored three locations outside the site, all within half a mile radius of the venue, and worked to a priority system to ensure that the most sensitive location for each event was the one we focused the attention on most. As the site is a natural bowl and a bit of an amphitheatre, the sound is projected across the top of the audience, and because it’s concrete it does offer some resonance which sends the sound back in the opposite direction and amplifies it upwards as it leaves the amphitheatre. This is where some of the noise sensitive locations we looked at are.

“This is our first year working with Scarborough Open Air Theatre and thus far we've had a hugely successful year with no complaints to either the environmental health team or to the venue themselves, which is testament to the level of cooperation between us and the Adlib audio team and engineers.”

“Symphotech have worked with Cuffe & Taylor before and have worked with a number of outdoor venues including York Racecourse. The working relationship with Cuffe & Taylor was important because when we spoke to Symphotech’s Julian Spear he knew a lot of the front-of-house guys already, so it was a logical step to take. The team is hugely knowledgeable and professional and it’s great to be working with them.”

“We were pleased to support Symphotech in using the live web based noise monitoring system, NoiseScout, to help manage compliance with licensing conditions.  The primary benefit of this increasingly popular approach to venue noise management is the constant visibility of noise levels at one or more off-site locations allowing possible issues to be addressed before a non-compliance condition arises.”

This July, it was announced that Live Nation is to take over the operation of Scarborough’s Open Air Theatre from its subsidiary, Cuffe & Taylor, and build on the success of the venue. This partnership will help the venue to flourish further with Live Nation requesting to work with the council on providing a permanent standing area in front of the stage, which would increase the theatre’s capacity and enable it to benefit from increased revenue and prestigious acts.