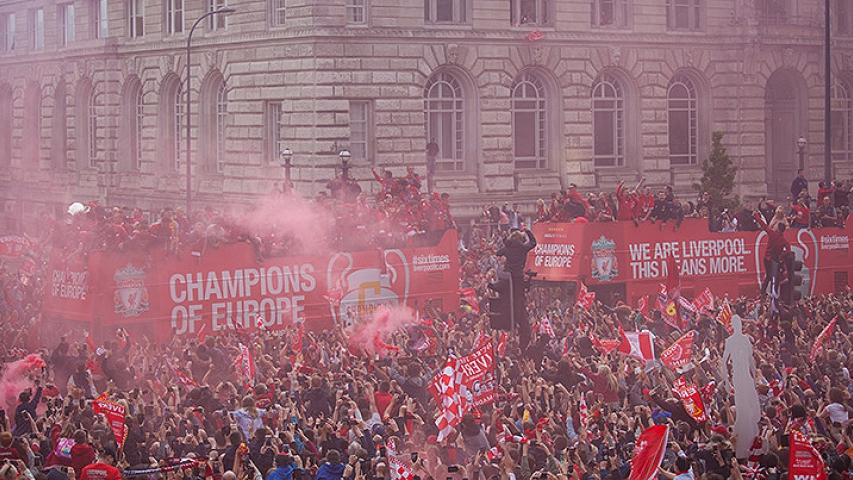 An estimated 750,000 fans lined the 15km parade route across Liverpool culminating at its iconic waterfront. Jubilant fans came from all over the UK to see the three open-top buses make their way through a city painted red by the vast amounts of flags and flares.

Sympthotech was engaged by Culture Liverpool, with Eddy Grant appointed the principal safety advisor for the parade, working collaboratively alongside Liverpool Football Club and the Merseyside Police, and other multiagency stakeholders from the outset of planning early March forming contingency plans to manage a safe celebration with minimum possible disruption to the city.

“We’ve worked with Eddy and Symphotech for many years and their knowledge of event safety, crowd dynamics, the locality, our service partners and resources, gave us the confidence that they would be great partners, integral in helping us deliver one of the biggest events the City has ever seen.

“There were so many different factors and contingencies within contingencies to consider for an event that played out under the eyes of the world’s media.”

Building on plans this events team had made for the 2018 Champion’s League final and this seasons’ potential Premier League win, the organisers planned meticulously, without knowing if it would happen until 10 pm the night before, when Liverpool claimed a 2-0 victory over Tottenham Hotspur in Madrid.

On the parade day, Eddy was based with Sue and the multi-agency control and the parade management team coordinating on the ground operations, welcoming the team in from their flight and setting them off on the coaches. Symphotech’s Paul Marley was in the lead vehicle in front of the buses, with Walter Hubers selected to go on the team bus due to his ability to speak seven languages and previous public parade experience.

Symphotech director Will Hodgson and Pete Watts focused their attention on the final two kilometres of the route down The Strand past the Liver and Cunard Buildings to its end point opposite Queen’s Wharf. With over 200,000 people condensed into this part of the route, additional pedestrian barriers and security were deployed here all supported with Merseyside's Blue light team.

“This was a unique event, with a complex multi-agency operation, where fast, effective communication and decision making working with experienced partners assessing multiple risks ensured the safety of hundreds of thousands of people – and of course the Liverpool Football team. It was a long day we reflected on with triumph, pride and a sprinkling of relief as the city was cleared and returned for its normal Monday morning business.”