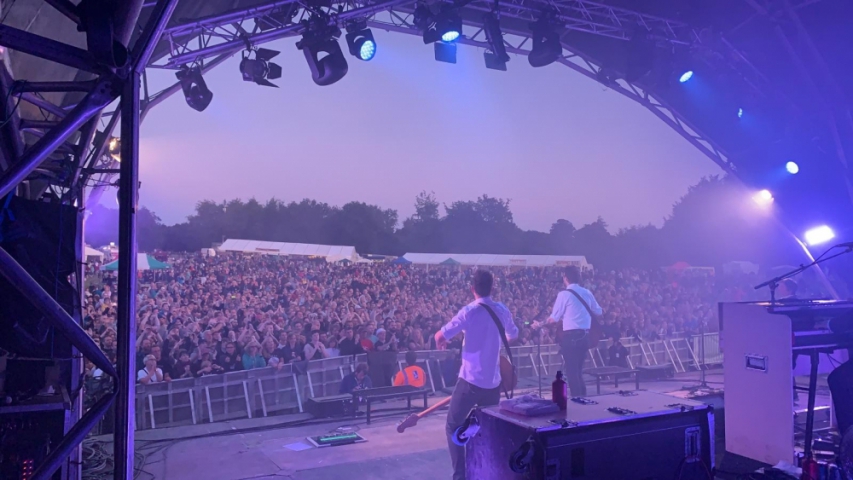 The Queen Elizabeth Oak Field attracted 8,000 people to each of two unique events. A full Saturday of proms entertainment featured the Red Devils, the Grace Spitfire and cavalry displays. Artillery gunfire introduced the orchestral Battle Proms Picnic Concert, featuring a rousing rendition of The Battle Symphony as it was originally scored with 193 live-fired canons, and a pyrotechnic finale lighting up a sea of flags.

This preceded a complete overnight change, seeing the Pimm’s and Union Jack décor transformed into traditional arts and crafts stalls and artisan food and craft beer for Sunday’s Folk by the Oak, with two music stages spanning the melodic to the exhilarating from The Staves, Seth Lakeman and a heady mainstage closing set from Frank Turner & The Sleeping Souls.

The site has evolved since the Symphotech team were first engaged in 1999 with production values high on the agenda to ensure audience enjoyment. An innovative change to the orchestral sound design was conceptualised by Symphotech founder Julian Spear. A move away from mic’ing individual instruments and remixing sound, to grouping the sections of the orchestra, gives the conductor control of the sound and gives the audience an authentic experience of the music.

Promoter and organiser, JSL Productions, long-held desire to expand to a two-day event using the existing Battle Proms infrastructure came to fruition in 2008, with the introduction of Folk by the Oak and Symphotech was on hand to support the development of a joyful and highly successful festival evolving across the last 10 years.

“We are brought in to logistically plan the weekend with key deliverables being the provision of superb sound and a smooth show and timely finish. Change-overs require a cool head when we get large groups of multi-instrumentalists. However, we take care to look after every artists’ needs, with good processes in place so that there is always a friendly and organised atmosphere onstage and backstage so our staff can really deliver.”

The main stage team this year comprised of Symphotech’s on-site stage manager Pete Watts, along with five engineers and stage technicians from Clair Global who supplied the audio, supplemented by stagehands supplied by crewing company DNG to support event production.

Claire went on to say:

“As always we expect the unexpected: last-minute requests and situations, but the team is well equipped to deal with whatever arises. The goal is a calm and enjoyable event for everyone and for us, it was a special twentieth-anniversary show. We love working with JSL’s lovely team and in this stunning venue, it was great to be part of a memorable weekend.